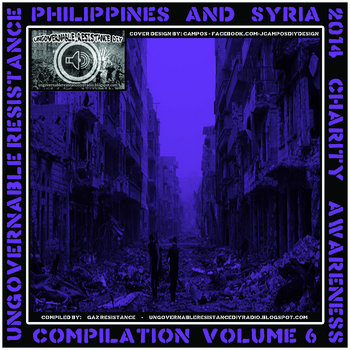 Ungovernable Resistance started this compilation during the late summer of 2013 aiming to raise awareness & support for refugees in Syria, and people suffering in the Philippines who lost everything in the earthquake. This is a charity compilation to raise funds for victims of the Philippines earthquake & Syrian refugees so any donations are sent to the UK Doctors Without Borders Pay Pal email which is help@justgiving.net.

Or you can go to our Just Giving page below, which is also a direct link to the Doctors Without Borders donation page. Details below. Plz claim ‘gift aid on all donations to increase the amount for free’. Thanks. You can donate directly to Doctors Without Borders via this link www.justgiving.com/resistance-diy or our Bandcamp. If you cannot afford to donate then please help spread the word about this compilation.

Médecins Sans Frontières aka ‘Doctors Without Borders’ are an independent, and neutral organisation providing medical and humanitarian aid across the world.

The DIY/underground punk/hc, metal, & hip hop scenes came together to unite as one for our compilation to demonstrate that different cultures and music can work together to help those in dire need. All of the artists donated their music for free & we hope there is something here for everyone as its incredibly diverse spanning 10 volumes in total.

We needed to do something to help no matter how small & hopefully encourage others to do the same. Media coverage quickly moved on from the initial disaster in the Philippines, but the situation hasn’t changed as they still need vital aid across several humanitarian areas.

The on-going civil war in Syria has created thousands of refugees and displaced people from their homes, as well as many causalities caught up in the fighting between the 2 sides. The majority of the mainstream media focuses on the political climate. Therefore, Ungovernable Resistance hopes to raise awareness surrounding the current the plight of the people in Syria so that they do not become forgotten.

Jon Regul Stops by the PXR Mothership to do another shout out!

There are no upcoming events at this time.